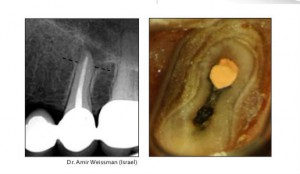 The above x-ray looks good enough not to have periapical breakdown. The cross section, unseen on x-ray, tells us why pathology remains.

It has been about 25 years since the introduction of greater tapered rotary shaping. This technology was and is considered a major advance over the manual use of K-files coupled to the use of gates glidden and peeso reamers. NiTi allows instruments to have greater than 02 tapers while retaining flexibility along the thinner portions of their length. Rotary reduced hand fatigue wherever these instruments could replace the former manual use of K-files. The greater taper provides a wider space for better irrigation and being engine-driven generally speeds up the cleaning and shaping procedure. To a significant extent, the shape of the canal at least in the mesio-distal dimension produced by the greater tapered instruments are matched by comparably sized gutta-percha points giving more predictability to both instrumentation and obturation.

The most obvious clinical weakness of these systems is the increased potential to separate instruments leaving a segment in the canal that may be impossible to remove, eliminating full patency to the apex and compromising complete cleansing and shaping of the canal from orifice to apex. While this is the most obvious shortcoming, other weaknesses include inadequate cleansing in what is often the major diameter of oval isthmus-like pulp configurations, the production of dentinal micro-cracks and the removal of excess tooth structure in the usually far thinner mesio-distal plane leading to reduced resistance to vertical fracture.

Despite these drawbacks, rotary NiTi  systems have been adopted by most dental schools making it part of their core curriculum. From a practical point of view, the experiences using rotary NiTi will vary depending on the state of the original pulpal anatomy. If it is wide and fairly straight, creating a glide path to a 20 will take minimum time and the subsequent use of greater tapered instruments will generally not encounter much resistance. Without question the canals will be rapidly prepared in the mesio-distal plane and when obturated will present a radiograph that will more than likely depict a well-filled and well-condensed canal. However, without specifically going after tissue in the mesio-distal plane, something fraught with risk when using rotary instruments, it is likely that untouched tissue remains in the buccal and lingual extensions of oval isthmus-like anatomy that is not reflected in the periapical x-rays typically taken to verify a well done job of instrumentation and obturation.

We have a mini dichotomy. The easier a case is to instrument the greater the likelihood that we are leaving tissue remnants in the buccal and lingual extensions. Yet, we are so pleased with the ease in attaining these results and the picture they present on x-ray that we minimize our powers to critically analyze what we have just accomplished. What is left behind leaves no telltale evidence of still being present. Today we treat many older patients with canals that are extremely hard to find and then negotiate to the apex. Here the creation of the glidepath to the apex is the most important step in effective endodontics. Once opened to a 20/02 to the apex, the challenges of creating a greater taper and wider apical preparation are significantly reduced. From this observation we can conclude that the more difficult the case, the more dependent we are on the use of instruments to create the initial glide path. Within this category, reamers unrelieved through a 10 and relieved with a flat along their working length from 15 onwards rapidly oscillating in a 30-45º reciprocating handpiece 3000-4000 cycles per minute have the best chance of negotiating and widening the canal rapidly and effectively to create a glide path that can subsequently be widened to a 30/04 using only 2 more instruments. Please note that limited to a short arc of motion, all the instruments throughout the sequence can be used vigorously against the wider buccal and lingual extensions of oval isthmus-like canals with no fear of instrument separation. It is the confidence the dentist has in retaining an intact instrument that is the incentive for vigorous and effective lateral cleansing that creates a canal space in the wider buccal and lingual dimensions greater than the dimensions of the instrument used to shape the canal.

It should be noted that instruments limited to short arcs of motion do not fatigue nearly as much as instruments subjected to full rotations allowing their multiple usage where the downside of over usage is dullness not breakage. This is a far more favorable situation than the required single usage of greater tapered rotary NiTi recommended by so many manufacturers and the advocates they employ, adding a dramatic increase of costs that are irrevocably tied to rotary NiTi.

We often say that the jury is still out on what is optimum for the benefit of the dentist and his patients. From the video I posted showing  a conservative mesio-distal preparation coupled to a broad bucco-lingual preparation  thoroughly  cleansing the tooth with minimal loss of tooth structure, and without the associative problems of dentinal defects and instrument separation,  we are setting standards that preserve the quantity and quality of the remaining tooth structure. These are imo the standards that should have been the guiding light from the beginning.

Those advocating minimal preparations are beginning to react to techniques that advocate the excessive loss of dentin as a defiance of common sense despite 25 years of marketing by the majors who would have us uncritically employ techniques that are being documented as destructive to the teeth being treated. One early note of caution should be stated at the outset of this “new” look. While dentin is being conserved in the mesio-distal plane, a goal worthy in itself, it will mean little if the tissue ensconced in the buccal and lingual extensions is not recognized as a source of future breakdown if left untouched.