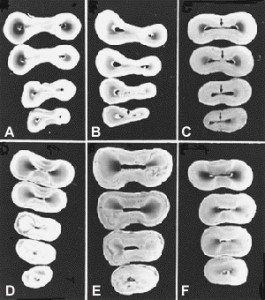 When shaping canals it is axiomatic that we are attempting to gain access to a pathway to the apex that is at least to some minimal extent open. Given the curved nature of canals and their tendency to calcify with aging this can often be a challenging task. While reaching full length can often be a difficult task to achieve, this difficulty cannot be used as a rationalization to limit the instrumentation of the canal to conical shaping. Without doubt conical shaping will remove more than enough tissue and dentin in the mesio-distal plane. Rotary instrumentation using varying degrees of greater tapered instruments will prepare a canal space that is more or less of equal dimensions in both the mesio-distal plane and the bucco-lingual plane. This makes no sense when anatomic studies of the dental pulp clearly demonstrate a far wider canal in the bucco-lingual plane than the mesio-distal plane in the majority of teeth.

The obvious fact that tissue intimately resides within this highly oval isthmus-like anatomy is ignored because the most marketed techniques for endodontic canal shaping do not address this asymmetry. An often-heard rationalization for this oversight is that irrigation will effectively remove these “remnants”. Yet, we would not dream of simply irrigating a pulp chamber with the hope that tissue along the length of the canal will be effectively digested and bacteria killed without first opening it to a dimension where the irrigants can overcome their own surface tension. The literature states that a preparation to a 30 is the minimal size required for effective irrigation. While the central portion of a canal may indeed be open to a minimum of 30, any tissue that resides in a space less than 30, and isthmus-like spaces are significantly thinner than a 30 preparation, will have minimal contact with the irrigants. In short, the tissue residing in the lateral spaces, untouched by conical shaping will remain as well as the bacteria that may be infesting it.

In light of this documented reality, our appraisal of the quality of instrumentation is distorted by our reliance on the mesio-distal periapical radiograph determining whether or not we did a thorough job. A beautiful mesio-distal x-ray that reflects conical shaping without touching the full bucco-lingual length of a canal can be misleading. One might advocate the use of greater tapered rotary instrumentation whether generated continuously or interrupted by stating that the greater the taper the more it will include pulp tissue ensconced in the bucco-lingual dimension. While that is true, the increased amount of tissue removed in the bucco-lingual plane will be accompanied by an increasingly excessive amount of tooth structure removed in the mesio-distal plane resulting in decreasing the root’s resistance to vertical fracture and the production of dentinal microcracks that are better avoided.

Understanding the inadequacy of irrigation where canals are not opened to a minimum of 30 along their entire length and width and the detrimental effects of greater tapered instrumentation, the concept of creating conical spaces where the canals are not conical to begin with is a false notion upon which greater tapered rotary NiTi is based. Given this shortcoming, one might ask why we are relying on systems that produce greater tapered conical shapes.

Conical shaping employs a crown-down technique, a gradual way of reaching the apex that reduces the incidence of greater tapered rotary instrument separation. Along with straight-line access, a major emphasis is placed on keeping the instruments intact. One does not think of it exactly in these terms, but the techniques employing greater tapered rotary instrumentation have evolved to foremost protect the integrity of the instruments with little concern for the structural integrity of the tooth. Staying centered with minimum deviation bucco-lingually also helps in keeping the instruments intact and it too has been employed without regard to the tissue and bacteria that may be left in these lateral extensions.

An entire marketing industry has been created stating that greater tapered rotary instrumentation is a paradigm improvement despite the fact that the techniques expose the instruments to stresses that potentially lead to instrument separation and to reduce this possibility led to techniques that remove excess tooth structure in one plane while inadequately removing tissue and bacteria in the other. The fact that greater tapered rotary instrumentation is associated with dentinal microcracks is information that its advocates do not bring up.

An alternative solution would start with a technique that virtually guarantees the instruments will stay intact. That is an absolutely minimal requirement if we are to tell dentists that the canals must be actively shaped in the bucco-lingual dimension. This goal is readily accomplished by confining the motion of the instruments to 30-45º arcs, 1/12 and 1/8 respectively of a full rotation. At such small amplitudes, the destructive effects of torsional stress and cyclic fatigue are virtually eliminated even when negotiating highly curved canals. Once, separation is no longer a concern, we do away with the need for greater tapered crown-down shaping as well as straight-line access. Most shaping is confined to 02 tapered instruments preserving tooth structure in the mesio-distal plane where canals are routinely quite thin with minimal taper along their entire width. We also do away with the need to stay centered. Dentists can vigorously apply lateral pressure with the thinnest instruments to gain better access laterally into what are often tear-shaped canals with thin isthmuses often lying between them.

Even with the automation of greater tapered rotary instrumentation, the creation of the glide path was often a difficult manual process leading to time-consuming hand fatigue. The short arcs of motion generated in a 30-45º automated handpiece oscillating at 3000-4000 cycles per minute are employed with the thinnest instruments 06 tipped 02 tapered stainless steel reamers immediately after root length determination eliminating the hand fatigue with rapid canal shaping up to a  minimum of 30 and larger if the canals require it. The space created in both planes is now wide enough for the irrigants to accomplish their tasks in three dimensions.

By substituting 30-45º reciprocation for greater tapered rotation, we create a cascading of virtuous events. Instruments remain intact, to be used several times with significant savings, more tissue is removed bucco-lingually, less dentin is removed mesio-distally, dentinal micro-cracks are dramatically reduced and we can now utilize endodontic techniques that are in harmony with the tooth’s natural anatomy rather than distorting canal shaping for the sole benefit of the instruments. The goal should always be the preservation of the most tooth structure consistent with the maximum amount of pulp tissue and bacteria removed.