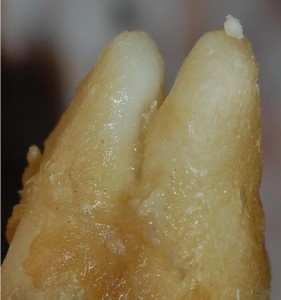 I watched a video posted on linkedin recommending the use of rotary instruments over reciprocating systems primarily because the speaker stated that reciprocation pushes more debris over the apex. It should be added, that the version of reciprocation he was referring to was asymmetric meaning it rotated more in one direction than the other leading to interrupted, but full rotations. The consequences of full rotations are a greater potential for instrument separation. Interrupted rotations reduce instrument separation compared to continuous rotations, but are still greater compared to systems that do not produce full rotations. The increased potential for separation led to landed instruments that reduced torsional stress, but also reduced the efficiency of shaving dentin away from the canal walls requiring more rotations that in turn led to an increase in cyclic fatigue that lead to instrument separation, a conundrum that has yet to be resolved.

Given that reduced incidence of separation resulting from short non-rotating arcs of motion is so beneficial, let us examine whether or not rotation leads to less debris being extruded apically. The speaker states that rotation augers out debris rather than pushing it forward. Reciprocation, on the other hand, pushes debris forward. These concepts are simply wrong. We know rotary NiTi, particularly non-landed instruments, are drawn into the canal and care must be taken to prevent their going beyond length. Unlike plastic blocks, root canals are often filled with pulp tissue. As the rotating instrument is drawn deeper into the roots the non-cutting tip will drive the tissue beyond the confines over the apex. This likelihood is far greater with rotating instruments than reciprocating ones particularly if the reciprocation is confined to 30-45º arcs of motion, the added benefit being the virtual elimination of instrument separation. Instruments limited to short arcs of motion are not drawn apically reducing the potential for the extrusion of apical debris.

Comparing a full sequence of greater tapered rotary NiTi instruments to the single  instrument used in interrupted rotations (non-linear reciprocation) where that one instrument is responsible for all dentin removal represents conditions that favor greater apical extrusion of debris. A truer comparison would be the amount of debris extruded through a series of instruments used in interrupted rotations. That type of system does not exist. What does exist is a series of relieved vertically fluted predominantly 02 tapered relieved reamers confined to 30-45º amplitudes of motion oscillating at 3000-4000 cycles per minute simulating high frequency hand reaming.

Looked at from this perspective, the literature supports a reduced amount of apical debris being produced when employing short arcs of motion at high frequency. It represents the safest way to keep the instruments intact, allowing multiple usage and significant cost savings. It has the added benefits of being used to vigorously remove the tissue in the buccal and lingual extensions that are often missed when using greater tapered NiTi instrumentation whether used in continuous or interrupted rotation. Another significant finding is that short amplitudes of motion whether done slowly by hand or driven by high frequency engines do not induce the dentinal defects that are associated with greater tapered instrumentation whether used in continuous or interrupted rotations. It is a comforting thought to know that the increased resistance to separation the instruments have when employed in 30-45º reciprocation is mirrored in the increased safety of the root that is subjected to the same stresses.

In summation, no system is immune to the extrusion of some debris. What is of greater significance is the increased safety to both the roots and the instruments when lesser-tapered instruments are confined to short arcs of motion. The quantity of remaining dentin is increased leaving a stronger root while the amount of remaining pulp tissue often ensconced in the buccal and lingual extensions of  highly oval isthmus-like canals is significantly reduced. Producing these conditions is consistent with a higher long-term success rate.